Screen Time in the Meantime

I am constantly bombarded by reading and hearing about parents who feel guilt for letting their kids have too much screen time over the last few months. I am not talking about zoom learning and home school setups that involve your child being in front of a screen. I am referring specifically to the amount of time we let our toddlers and children watch youtube, Netflix and Disney+. While the #momguilt (okay, and #dadguilt) may feel real sometimes, it's no lie that screen time helps us all get through the day. However, I am constantly battling this cacophony back and forth in my own head that while it's giving me a slice of "time-off" to do other things while my kids watch TV, I am also feeling dumber every time I hear the theme song to Blue's Clues.

Before the era of COVID, my kids were basically in daycare all day and screen time was limited to Sundays and sick days. We were cool with that; it served a purpose and didn't feel too overwhelming, guilt-provoking or anti-parenting. Fast forward to March 12th, 2020.

Ever since the first few days at home, we basically sat glued to our phones waiting for an email or news blast about the current state of affairs with out jobs, the government, our travel plans, Passover plans, soon-to-be postponed weddings and bar mitzvahs... how would people celebrate the birth of a new baby if we were all stuck at home for an indefinite amount of time? Was it even safe to go to CVS? Those first few days and weeks seemed bizarre and while we plopped our kids in front of a TV or tablet for the meantime, we never expected it would become a real topic of conversation just a mere month or so later. 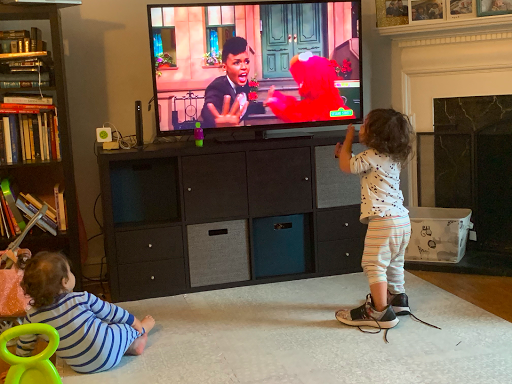 Then came April. May. June.

We could only try our hardest to fill these last few months with outdoor excursions, given that so many things were still closed. Fencing in our front yard meant we could maximize time outside and maybe minimize the screens. Most people I knew at home with their children became fixated on admitting they were "giving in to too much screen time,"  but we all know that secretly, beneath it all, our kids would survive! Let's talk about who the REAL victims really are in this situation. We are more glued to our screens and the repeating theme songs to our kids' shows than ever before in the history of parenting!

An adult can only watch so much Cocomelon, Sesame Street, Frozen, Blippy and videos of cute pets. After a while it becomes mind-numbing. Because we are adults and we thrive on human interaction,  intellectual conversations, and the state of affairs in the real world that are happening beyond our front door. To be honest, my kids memorized songs from watching shows on repeat, and I believe they are smarter because of it. My daughter isn't three yet but is freakishly advanced in her ability to memorize lyrics to songs and retain information. If we're being completely dorky about the facts, just know that frequent recall (AKA WATCHING THE SAME SHOW OVER AND OVER AGAIN) is scientifically proven to help children with brain development, language, problem-solving, etc. Don't believe me? Google it.

Our kids are going to grow up in the age of technology and information overload, whether we let them watch youtube today or not. They're probably going to be learn to type before they learn how to calculate what 30% of $200 is. We should probably shift our fear from too much screen time to the overall issue on the table, which is that children in the 21st century will never know anything different than using their device to help them do everything in their daily lives. So ... are you really feeling so bad about that extra hour in front of the TV? Dig a little deeper; it's likely not the true source of your distress. Want to talk more about it? Drop me a line to talk more!

fabulouslyfitsa said…
It’s great to come across a blog every once in a while that isn’t the same out of date rehashed material. Fantastic read. Best kids watch service provider.
March 22, 2021 at 11:50 PM

Popular posts from this blog

The Cleanest Kids Since COVID19

April 27, 2020
Bath time with my two babies simultaneously. It's always been a struggle for me. #twoundertwo "Just throw them in the tub!" "Give them a bath to pass the time!" "Oh, just let them play in there, it's so much FUN!" These are frequent lines from people (people who aren't me) that have not actually witnessed my baby being body-slammed by my toddler in an innocent effort to show him her "baby shark" act. These are from people who feel badly for my long and exhausting days, who just want to offer a suggestion that in theory seems FUN, but in reality is HELL. I hate the shape of my kid's bathroom vanity and how it prevents me from being near both of them at all times. I hate that my 2 year old is a little more sturdy and aggressive during play, so she drowns out my 1 year old with a cup of water. I hate how my baby is learning to walk and when he stands up in the tub, all I can imagine is him slipping and hitting his head on the
1 comment
Read more

You Don't Have to Love the Beach

July 22, 2020
Not EVERYONE has to LOVE the beach!  Okay - there - I said it! I don't love the beach, and maybe you don't either. Maybe it's time for people to openly admit that the beach isn't EVERYONE'S happy place, not everyone's paradise... it's okay if you prefer the mall, your mother's front porch, or even your bed. I certainly prefer all three of those things, and feel like there is a giant stigma that in the summer, everyone has to love the beach. Let's all just stop pretending that humidity, sand and scary waves are everyone's dream vacation. It's okay to prefer to stay home, let your kids run around in the living room or on your front lawn with a hose. It's okay to feel nervous about going to large public places even if they are outdoors. And it's certainly okay to opt out of never ending sand and schlepping in a crew neck with sleeves and my head covered. It has taken me years to admit this. This summer, after a few weekend trips to t
Post a Comment
Read more